Features of Various Types of Gyroscopes 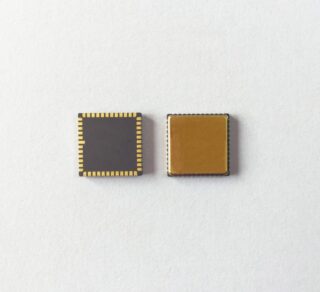 When a particle moves in a straight line relative to the inertial system, its trajectory is a curve relative to the rotating system because of the inertia of the particle itself. Based on the rotating system, we believe that there is a force that drives the trajectory of the particle to form a curve. Coriolis force is a description of this offset, expressed as:

That is to say, when the linear motion is placed in a rotating system, the linear trajectory will be offset, but in fact the problem of linear motion is not affected by the force. The establishment of such a virtual force is called the Coriolis force.

Therefore, in the gyroscope, we select two objects, they are in constant motion, and make their motion phase differ by-180 degrees, that is, the two mass blocks move in opposite directions and the same size. The Coriolis force they generate is opposite, thereby compressing the two corresponding capacitive plates to move, resulting in a differential capacitance change. The change in capacitance is proportional to the rotational angular velocity. The rotation angle change can be obtained from the capacitance.

High precision, high process requirements, high cost, and the need for complex electronic devices, such as support systems and goniometric systems. The development of electrostatic gyroscopes in my country began in 1965, and was carried out along the hollow sphere scheme of Honeywell Company. In 1990 it was certified with a random drift rate of 0.001°/h. In the mid-1990s, it turned to the development of the solid ball electrostatic gyroscope solution, but the process requirements are very high, and the extremely small geometric errors of the rotor or electrodes will cause interference force rejection, resulting in gyro drift.

Electrostatic gyroscope is the most accurate gyroscope, and it is suitable for long-term working environment, so it has been widely used in nuclear submarines and long-range aircraft.

Laser gyro has high precision, strong shock resistance and wide dynamic range. The biggest problem is that its manufacturing process is relatively complicated, resulting in high cost, and its volume and weight are also too large. This aspect limits its further development and application. On the other hand, it also promotes the development of laser gyroscopes in the direction of low cost, miniaturization and three-axis integration.

The fiber optic gyroscope is a sensitive element based on an optical fiber coil, and the light emitted by the laser diode propagates along the optical fiber in two directions. The difference in the light propagation path determines the angular displacement of the sensitive element. Compared with the traditional mechanical gyroscope, the fiber optic gyroscope has the advantages of all solid state, no rotating parts and friction parts, long life, large dynamic range, instant start, simple structure, small size and light weight. Compared with the laser gyroscope, the fiber optic gyroscope has no blocking problem, and does not need to precisely process the optical path in the quartz block, so the cost is relatively low.

Modern fiber optic gyroscope is an instrument that can accurately determine the orientation of moving objects. It is an inertial navigation instrument widely used in modern aviation, navigation, aerospace and defense industries. The development of high technology is of great strategic significance.

Small size and light weight. Micromachined gyroscopes mainly use integrated circuit-like silicon processing technology. The device size is in the order of millimeters and the weight is in the gram level.

Easy to integrate. The gyroscope using the MEMS process is easy to system integration, and the circuit accelerometer is integrated to realize the inertia combination.

Due to the above advantages, MEMS gyroscopes are widely used in various fields. Especially in aviation, aerospace, military, industrial applications, intelligent manufacturing and other fields that require high weight and size, MEMS gyroscopes have absolute advantages.