The MEMS gyroscope is the positioning module of the car’s automatic driving function. The automatic driving car positioning system is usually composed of a GPS module, a three-axis acceleration sensor and a three-axis gyroscope. By combining the 360-degree information obtained by the sensors, it can provide the vehicle with its position. and relative position information to surrounding objects. The so-called MEMS gyroscope is defined as a micro-electromechanical system. The traditional gyroscope mainly uses the principle of conservation of angular momentum, so it is mainly a constantly rotating object, and its axis of rotation does not change with the rotation of the bracket that carries it.

In the existing car simulators and car driving assessment systems at home and abroad. The state signals of the pedals (accelerator pedal, footbrake pedal, clutch pedal) and handbrakes and other operating mechanisms are extracted mainly by installing angle sensors or by the mechanical device converts the rotational motion of the mechanism into linear motion, which is realized by installing a linear displacement sensor; the position state of the gear position is obtained by installing a travel switch group or a non-contact switch group at different positions of the gear position to obtain the switch signal and obtain the gear position. location information.

Micro-Electro-Mechanical Systems (MEMS) Technology Micro-machine inertial devices are becoming more and more mature, and inertial measurement systems have developed rapidly. The inertial measurement system integrates microelectronics, precision machinery, and sensor technologies, and has the characteristics of higher integration, better cost performance, smaller size, and lower power consumption. It is suitable for mass production, and has a high cost performance, and has been widely used in automobiles. The gyroscope and accelerometer are important components of the attitude measurement system. The sensor integrates a three-axis acceleration sensor and a three-axis gyroscope sensor. It has the characteristics of small size, strong function and low power consumption, and fully meets the data of the driving motion parameters of the car. Collection requirements. 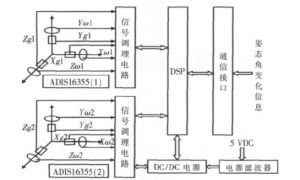 The attitude measurement system of the car driving simulator is shown in picture. It mainly includes three parts: a signal acquisition module (gyroscope and signal conditioning circuit), a signal processing and transmission module, and a power supply module. The signal acquisition module is composed of a MEMS gyroscope sensor and a signal conditioning circuit, which completes the physical quantity conversion of the inclination of the vehicle driving operating mechanism such as the accelerator, footbrake, clutch, handbrake, gear position, etc., and completes the reliable transmission of the sensor output signal; signal processing and the transmission module is composed of DSP as the core device, which can accurately measure the inclination change of the motion mechanism under the condition of attitude and dynamic acceleration changes, complete the digital filtering of the signal, the calculation of the integral of the angular velocity change into the angle change, differential processing and serial output wait for work.