Application of GPS and IMU (Inertial Navigation) in Unmanned Driving

Driving positioning is one of the core technologies of unmanned driving, and the Global Positioning System (GPS) also plays a very important role in unmanned driving positioning. However, the unmanned vehicle is driving in a complex dynamic environment, especially in large cities, the problem of GPS multi-path reflection will be obvious. The GPS positioning information obtained in this way can easily have an error of several meters. For a car traveling at high speed with limited width, such an error is likely to lead to a traffic accident. Therefore, we must use other sensors to assist positioning and enhance the accuracy of positioning. In addition, due to the low update frequency of GPS , it is difficult to give accurate real-time positioning when the vehicle is moving fast. 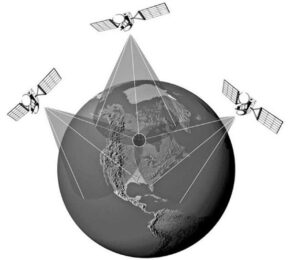 As shown in Figure 1, the GPS positioning system uses the basic triangulation principle of satellites, and the GPS receiving device measures the distance by measuring the transmission time of the radio signal. From the position of each satellite, measure the distance between each satellite and the receiver, and then the three-dimensional space coordinate value of the position of the receiver can be calculated. As long as the user receives three satellite signals using the receiving device, the user’s location can be determined. In practical applications, GPS receiving devices use more than four satellite signals to locate the user’s location and altitude.

The multipath problem refers to the error of the signal propagation time caused by the reflection and refraction of the GPS signal, which will lead to the positioning error. Especially in the urban environment, there are many suspended media in the air that will reflect and refract GPS signals, and the signals will also reflect and refract on the outer walls of high-rise buildings, all of which cause confusion in distance measurement. The current high-precision military differential GPS can indeed achieve centimeter-level accuracy in static and “ideal” environments. The “ideal” environment here means that there is not too much suspended medium in the atmosphere, and the GPS has a strong reception signal during the measurement. However, the unmanned vehicle is driving in a complex dynamic environment, especially in large cities, the problem of GPS multi-path reflection will be more obvious. The GPS positioning information obtained in this way can easily have an error of several meters, which is likely to cause a traffic accident.

Even with all its problems, GPS is a relatively accurate sensor, and GPS errors do not increase over time. But one problem with GPS is that the update frequency is low, probably around 10Hz. Due to the high speed of unmanned vehicles, we need accurate positioning in real time to ensure the safety of unmanned vehicles. Therefore, we must use other sensors to assist positioning and enhance the accuracy of positioning.

MEMS inertial sensors are divided into three levels: low-precision inertial sensors are mainly used in smart phones as consumer electronics products. The price of such sensors ranges from 50 cents to a few dollars, but the measurement error will be relatively large. Intermediate inertial sensors are mainly used in automotive electronic stability systems and GPS-assisted navigation systems. Such sensors are priced from hundreds to thousands of dollars. Compared with low-end inertial sensors, intermediate inertial sensors have certain corrections for measurement errors in the control chip. So the measurement result is more accurate. But after a long run, the accumulated error will become larger and larger. High-precision inertial sensors, as military-grade and aerospace-grade products, require high accuracy, full temperature range, and shock resistance. Mainly used for stable applications such as wireless communication satellites, missile seekers, and optical aiming systems. Such sensors, which cost hundreds of thousands of dollars, can still achieve meter-level accuracy even after long-term operation, such as a trans-Pacific intercontinental missile.

As mentioned above, even if there are problems such as multi-path, GPS is a relatively accurate positioning sensor, but the update frequency is low and cannot meet the requirements of real-time calculation. Inertial sensors, on the other hand, have positioning errors that grow over time, but because they are high-frequency sensors, they can provide stable real-time position updates for short periods of time. Therefore, as long as we find a method that can integrate the advantages of these two sensors and take advantage of their own strengths, we can obtain more real-time and accurate positioning. These two sensor data are typically fused using a Kalman filter.