Why is MEMS leading the way? 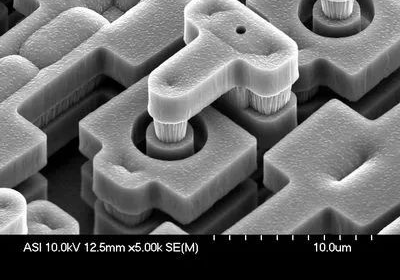 MEMS structure under the microscope (note the scale on the picture, it is microns)

Casio is famous for its electromechanical products such as motors and relays in its early years. Today’s Casio itself is one of the manufacturers of MEMS. It is Casio’s specialty to solve the problems encountered by traditional mechanical watches with the idea of  MEMS.

1. MEMS and sensors in smartphones

Many MEMS devices are used in smartphones, such as accelerometers, gyroscopes, electronic compasses, pressure sensors, silicon microphones, image sensors, MEMS micromirrors, BAW filters and duplexers, RF switches, TCXO oscillators/resonators, etc. . With the rapid growth of smartphone shipments, the mobile industry is gradually turning to a complex remote sensing platform, and MEMS and sensors are the most important part of the system, and the growth of each MEMS device is impressive.

2.The impact of MEMS sensors on UAV flight performance

Thanks to the use of inertial MEMS sensors, the drone can ensure its orientation is stable and can be precisely controlled by the user, even flying autonomously. However, several challenges complicate UAV system design, such as motors that are not perfectly calibrated, system dynamics that may vary depending on payload, sudden changes in operating conditions, or errors in sensors. These challenges can lead to biased positioning processing and, ultimately, positional biases during navigation and even failure of the drone.

Size constraints and harsh environmental and operating conditions, such as temperature changes and vibrations, will raise sensor requirements to new levels. MEMS sensors must avoid these effects as much as possible and provide accurate, reliable measurements.

There are several ways to achieve excellent flight performance: software algorithms, such as sensor calibration and data fusion; mechanical system design, such as vibration reduction, and selection of MEMS sensors based on the drone manufacturer’s own requirements and needs. Let’s take a closer look at MEMS sensors and refer to some examples.

At the heart of the drone is its Attitude Heading Reference System (AHRS), which includes inertial sensors, magnetometers, and a processing unit. AHRS estimates device positioning such as roll, pitch and yaw angles. Sensor errors such as offset, sensitivity errors or thermal drift can cause positioning errors. Figure 1 shows the positioning error (roll, pitch) as a function of accelerometer offset, which is often the core source of continuous sensor error. For example, an accelerometer offset of just 20 mg would cause a 1-degree error in device orientation.

MEMS IMUs include accelerometers and gyroscopes, and corresponding embedded handlers. This enables it to recognize motion in terms of linear movement and rotation. ERICCO’s MEMS IMU ER-MIMU-M01A sensor combined by MEMS gyroscope, MEMS accelerometer and magnetometer, gyroscope and accelerometer constitute the core components of the inertial navigation system. Through the built-in accelerometer and gyroscope, the IMU can measure linear acceleration and rotational angular velocity in three directions, and obtain the attitude, velocity and displacement information of the carriers. It is mostly used in motion control equipment, such as vehicles and robots, and can also be used on occasions that require the use of attitude calculation for accurate displacement, such as inertial navigation equipment for submarines, aircraft, missiles and spacecraft.