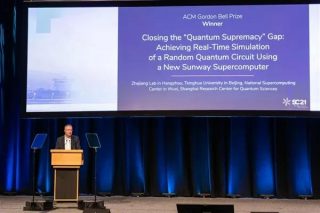 The Association for Computing Machinery (ACM) gave the 2021 Gordon Bell Prize, an annual award for outstanding achievement in high-performance computing, to a Chinese supercomputing team at the Supercomputing Conference (SC21) held in St. Louis on Nov 18, for their project entitled “Closing the ‘Quantum Supremacy’ Gap: Achieving Real-Time Simulation of a Random Quantum Circuit Using a New Sunway Supercomputer.”

Quantum supremacy, or quantum advantage, refers to a device capable of solving problems standard computers cannot in a feasible amount of time. Researchers at Google and the University of Science and Technology of China have both claimed to have developed devices that achieve quantum supremacy.

In their prizewinning project, Chinese researchers introduced a design process encompassing algorithms and parallelization as well as the architecture required for the simulation. Using the new-generation Sunway Supercomputer, they effectively simulated a 10x10x (1+40+1) random quantum circuit, which is considered a new milestone for simulation of RQC, far outpacing the most recent achievements of Google’s Summit supercomputer.