This Kind of Ship Will Become a Rigid Demand 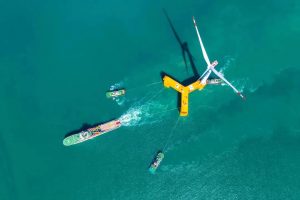 With the rapid development of supply chain and modular construction technology, the cost of floating offshore wind power has been significantly reduced. Experts attending the meeting said that, in fact, the energy cost of floating wind power is becoming consistent with the power produced by fixed devices, and will further decline in the future.

With at least 50 years of oil and gas development experience and self financing ability, Norwegian national energy company equinor ranks first in the field of floating wind power. In the past four years, Hywind Scotland, the world’s first floating offshore wind farm built by equinor, has successfully operated on the coast of Peterhead, Scotland, with a total installed capacity of 5 turbines of 30MW. The company has also developed the Hywind tampen floating wind power project, where eight floating turbines can produce 88mw of power for oil and gas production in Snorre and gulfaks oil fields in the North Sea.

The construction of floating wind power facilities may be modular, and the assembly operation will be carried out at the professional Wharf on shore. The wind farm will be towed offshore and connected to the pre installed mooring system on site. This will provide more space and reduce installation costs, and will also make larger turbine applications a reality, with an installed capacity of up to 20MW in the next 10 years.

Dan Jackson, a shareholder of cerulean winds, said that for fixed offshore wind power facilities, the rapid expansion of turbine size may be close to the actual limit.

Floating wind power has different requirements for ships. Compared with land, the wind speed and frequency at sea are higher and more stable because there are no obstacles to limit its path. Most of the manufacturing and assembly of the floating wind power structure can be completed in the port, after which the unit only needs to be towed to the offshore site. This avoids the use of installation vessels required for fixed foundations, such as large wind turbine installation vessels, jack up or dynamic positioning vessels. The installation of floating platform requires large dynamic positioning anchor supply tug (AHTS).

According to the analysis of maritime Strategies International, a shipping consulting agency, with the rapid development of large floating wind power projects, the demand for anchor handling supply tugs in this new market will increase in the mid-1920s. As a result, the utilization rate of anchor handling supply tugs will also increase. Coupled with the demand of Shanghai’s oil and gas industry, the rate of this ship type will also rise. However, there should be no new anchor supply tugs in the short term. When its demand increases strongly in the second half of the 1920s, the average age of the anchor supply tug fleet will be very high.

Of course, the size and endurance of future floating wind power service ships need to be larger.

Previous News
How to Improve the Sensitivity of MEMS Gyroscope?
Next News
Shell Produces 1st Gas from the Arran Gas
Menu