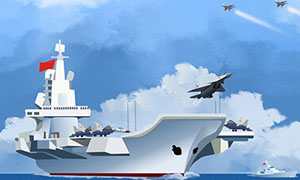 In the exhibition area, China’s air force and army are on the same stage, and the top 10 military enterprises in China have joined the stage for the first time.

China Aviation Industry Corporation took the theme of “New Era, New Action, Casting and Building Aviation Power”. A total of 134 exhibits were exhibited, 37 of which were unveiled for the first time, accounting for 28%. The highly anticipated Chengdu J-20  aircraft was launched for the first public formation flight; the Air 20 after the air force was re-appeared and displayed for flight; the large-scale fire/water rescue amphibious aircraft AG600, which had just completed the first flight in Hubei, also made a static Show.

At this year’s air show, the scale of international exhibitions continued to expand. Boeing, Airbus and other world-renowned aerospace companies all made their debut, especially the world’s “Top 100” aerospace companies have significantly increased their participation. The pavilions of traditional European and American countries such as the United States, Russia, France, Canada, Italy, Ukraine, Czech Republic, and the Netherlands continued to participate in the exhibition. The German and British pavilions returned strongly. Belarus first organized the national pavilion to participate in the exhibition. The proportion of participating countries in the “Belt and Road” countries also increased significantly. Upgrade.

Chinese and foreign cooperative aerospace companies have also frequently appeared, highlighting the openness and tolerance of China’s aviation industry and international enterprises. Beijing Tianjiao Aviation Industry Investment Co., Ltd. and its subsidiary Chongqing Tianjiao Aviation Power Co., Ltd. (collectively referred to as Tianjiao Airlines) and Ukrainian Madic Company participated in the exhibition again. The two sides exhibited four aero engines, including vortex shafts, turboprops, turbofans, etc., all of which were exhibited at the Zhuhai Air Show for the first time. On the joint booth with the shape of the engine turbine structure, the two parties showed the cooperation business system, development plan and the Sino-Ukraine aviation power cooperation project. This indicates that the cooperation between the two parties in the field of aero-engines has entered a new stage of development.

Previous News
China Successfully Launched The No.6 Satellite 03
Next News
What Is The Loose Combination Of GPS/INS Combined Navigation?
Menu