The First Batch of Female Pilots of Land Airlines Appeared 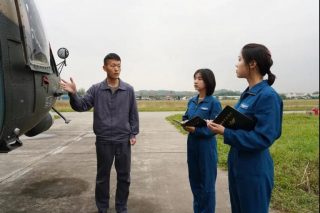 Pictures of one of the first batches of airwomen trained by the People’s Liberation Army (PLA) Ground Force have recently gone viral and won the Chinese audience’s hearts for its heroic outlook.

In a statement issued by the PLA Western Theater Command on its official WeChat account on Thursday, the 77th Group Army welcomed to the team Han Jianing and Chen Tianchang, two freshly graduated female helicopter pilots.

Both of the two airwomen have a story to tell with their dreams of becoming pilots. Living next to the airport, Chen yearned to be a pilot from an early age. Han planted the seeds of her dream after learning about the female pilots in the Air Force.

The instructor has revealed in a statement that Han and Chen are now taking basic classes to lay a solid foundation for “further improving their technology skills and strengthening psychological capacity.”

Based on the recruitment conditions released by China’s Ministry of National Defense, women must reach a height between 165 and 185 centimeters with 20/25 vision, plus a high score in the national university entrance examination, or gaokao.

Han achieved a score of 661 in gaokao, 100 points over the required level, becoming the first female high school graduate to attend the PLA training institute in Hainan.

In 2020, the headline of the “first promotion of 10 female army pilot students trained by PLA” attracted much attention.

After many hardships, these female pilots will fly high with the Chinese army.

Look forward to their performance!