Record High! 22 Stars in One Arrow! 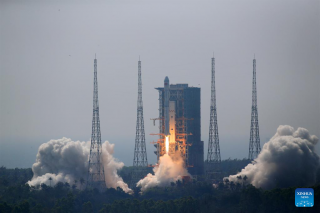 A modified version of China’s Long March 8 carrier rocket transported 22 satellites into orbit on Sunday morning in its debut flight, setting a record for the most satellites launched by a single Chinese rocket.

The rocket blasted off at 11:06 am from a coastal launch tower at the Wenchang Space Launch Center in Southern China’s Hainan province and flew more than 15 minutes before deploying all of the 22 small satellites, which were built by seven institutes and private companies, according to a statement from the China National Space Administration, the organizer of the launch mission.

Chen Xiaofei, one of the rocket’s head designers from the China Academy of Launch Vehicle Technology in Beijing, said the major difference between the modified variant and the original Long March 8 is that the new model doesn’t have side boosters. Its fairing is also shorter than that of the original type, he added.