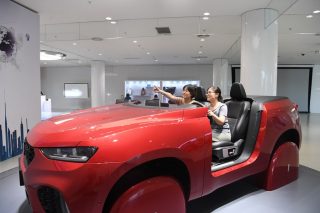 The United States’ and the European Union’s multibillion-dollar plans to support their semiconductor industries will fuel global competition in the strategically important sector, and China needs to double down to achieve breakthroughs in core chipmaking technologies, experts said on Thursday.

The comments came after the European Commission announced a new European Chips Act earlier this week that involves more than 43 billion euros ($49 billion) in public and private funding, with a goal of doubling the EU’s share of global chip production from 9 percent to 20 percent by 2030.

Last week, the US House of Representatives also approved $52 billion of federal funding for the US semiconductor industry.

Bai Ming, deputy director of international market research at the Chinese Academy of International Trade and Economic Cooperation, said the plans from the US and EU highlight the importance of chips to economic recovery amid the COVID-19 pandemic and to future economic growth.

“Competition in the global chip sector has reached a new high,” Bai said, adding that China has rolled out a string of policies, including tax reductions and funding support, to accelerate the development of its semiconductor sector.

“I believe such policies will evolve and be further strengthened,” Bai said, adding that more efforts will be made to encourage Chinese companies to achieve breakthroughs in core chip technologies.

The outline of the 14th Five-Year Plan (2021-25) for National Economic and Social Development and the Long-Range Objectives Through the Year 2035, for instance, said China will speed up the development of high-end chips.

The Ministry of Industry and Information Technology, China’s top industry regulator, said that one of its top priorities during the 14th Five-Year Plan period is to advance the modernization of industrial chains and to encourage companies to overcome crucial technical bottlenecks such as in the field of high-end semiconductor equipment.

Local governments in areas such as Shanghai, Tianjin and Guangdong and Zhejiang provinces are also moving fast, identifying integrated circuits as one of their key industries during the 14th Five-Year Plan period.

Roger Sheng, vice-president of research at US market research company Gartner, said that as the world’s largest chip market, China’s semiconductor industry has made progress in recent years.

In 2021, the sales revenue of China’s integrated circuit industry exceeded 1 trillion yuan ($157.3 billion) for the first time, with year-on-year growth of 18 percent, according to estimates by the China Semiconductor Industry Association.

But there is still a big technical gap between Chinese chipmakers and their foreign peers, especially in high-end chipmaking equipment and fundamental chip materials, Sheng said. China, for instance, relies heavily on imports for lithography machines that play a crucial role in chip production.

To achieve breakthrough in these areas, money is not enough. “Talent and time are the keys,” Sheng added.

Fang Xingdong, an independent expert who has been following the semiconductor industry for more than two decades, said the sector in China now faces increasingly fierce competition, as well as technological restrictions from the US government.

The New York Times described the legislation that includes the $52 billion chip plan, if enacted, as the most expansive attempt yet by the US to take on China. Washington has also restricted dozens of Chinese companies’ access to US technologies including semiconductor equipment and software.

“Within such a context, we have to beef up support and better leverage public and private resources to support homegrown semiconductor innovation,” Fang said.