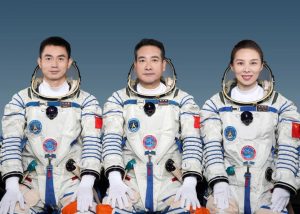 The Shenzhou XIII crew will be launched into space on Saturday, marking the start of China’s longest manned mission.
Major General Zhai Zhigang, 55, a native of Heilongjiang province, joined the People’s Liberation Army Air Force in June 1985. He is a veteran astronaut of the PLA Astronaut Division and was an experienced fighter pilot before being selected in January 1998 as one of the nation’s first astronauts.

Zhai was one of two alternates for Yang Liwei, who conducted China’s first manned spaceflight in October 2003 on the Shenzhou V mission, and was part of the backup crew for the Shenzhou VI mission in October 2005.
In September 2008, he undertook his first space mission onboard Shenzhou VII. He was accompanied by Liu Boming and Jing Haipeng. During the mission, Zhai and Liu conducted China’s first spacewalk.
Zhai was selected for Shenzhou XIII in December 2019.
Senior Colonel Wang Yaping, 41, a native of Shandong province, joined the PLA Air Force in August 1997 and served as deputy squadron commander before joining the second group of the PLA Astronaut Division in May 2010.

In March 2012, she was part of the backup crew for the Shenzhou IX mission and in June 2013, she took part in the Shenzhou X mission, which lasted nearly 15 days. She is the second Chinese woman to have flow to space.
During the mission, Wang gave China’s first space-based lecture inside the Tiangong I experimental module to Chinese students.
Wang was selected for Shenzhou XIII in December 2019.
Senior Colonel Ye Guangfu, 41, a native of Sichuan province, joined the PLA Air Force in August 1998 and was a senior aviator in a fighter jet regiment.

Ye became a member of China’s second group of astronauts in May 2010. He took part in a survival training session in Italy in July 2016 organized by the European Space Agency and was part of the backup crew for Shenzhou XII.
He was selected for Shenzhou XIII in December 2019.