The Main Principle of Satellite Navigation 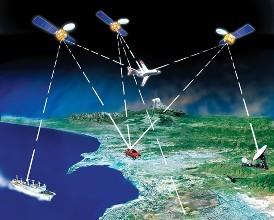 1 Doppler speed positioning: “Mid Meridian” satellite navigation system adopts this method. The user positioning device measures the Doppler shift curve based on the Doppler shift between the frequency of the signal received from the navigation satellite and the frequency of the signal transmitted on the satellite, and the position of the user can be calculated from the curve and the satellite orbit parameter.

2 time ranging navigation positioning: “Navigation Star” global positioning system uses this system. The user receiving device accurately measures the propagation time of the signals sent by the four satellites in the system that are not in the same plane (to ensure the unique result, the four satellites cannot be in the same plane), and then complete a set of mathematical operations including four equations. The three-dimensional coordinates of the user’s position and the error between the user’s clock and the system time can be calculated.