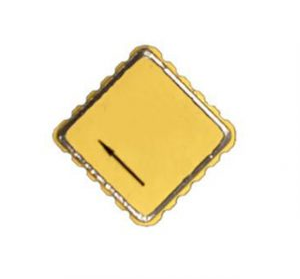 With the development of MEMS technology, inertial sensor devices have become one of the most successful and widely used MEMS devices in the past few years, and micro-accelerometers are an outstanding representative of inertial sensor devices.
The theoretical basis of the micro-accelerometer is Newton’s second law. According to the basic physical principle, within a system, the speed cannot be measured, but its acceleration can be measured. If the initial velocity is known, the linear velocity can be calculated by integrating, and then the linear displacement can be calculated. Combined with a gyroscope (used to measure angular velocity), objects can be precisely positioned. According to this principle, people have long used accelerometers and gyroscopes for navigation of ships, aircraft and spacecraft.
In recent years, people have used this technology for automatic driving of cars and guidance of missiles. The rapid development of the automobile industry has found a new application field for the accelerometer. The anti-collision airbag of the car is controlled by the accelerometer. As the most mature inertial sensor application, the current MEMS accelerometer has a very high degree of integration, that is, the sensing system and the interface circuit are integrated on one chip.
Among them, capacitive mems accelerometers are relatively mature in high temperature resistance, shock resistance and accuracy. ERICCO’s ER-MA-5 High Accuracy MEMS Accelerometer has the characteristics of small volume, light weight and low energy consumption that can be widely used in Inertial measurement: inertial guidance, overload measurement, combined navigation；Tilt measurement: antenna attitude, platform measurement, dip test；Vibration measurement: mechanical equipment, bridge dam, safety test.
Capacitive micro-accelerometers Capacitive micro-accelerometers are the most common, and there are also mature and popular products. The basic principle is to use the capacitor as the detection interface to detect the micro-displacement of the inertial mass due to the action of the inertial force. The mass block is supported and connected to the base by elastic microbeams. One electrode plate for detecting capacitance is generally arranged on the moving mass block, and one electrode plate is configured on the fixed base body, which is a typical sandwich-structure flat capacitive micro-accelerometer. And the developed capacitive micro-accelerometer uses comb-tooth array capacitance as the detection interface. The capacitive micro-accelerometer has high sensitivity and measurement accuracy, good stability, small temperature drift, extremely low power consumption, and strong overload protection capability; it can use electrostatic force to realize feedback closed-loop control, which significantly improves the performance of the sensor.