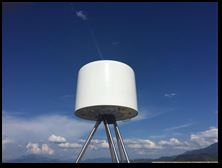 Considering that the stable platform works normally, the platform system is basically in position, and the two horizontal circuits are relatively coupled to each other. Therefore, in design, the two circuits can be considered separately. The following discussion takes a single-axis circuit as an example. Figure 1 shows a general block diagram of the platform system stability loop.

In the middle KD is the DC gain; Bw is the bandwidth; Td is the delay time.

Usually medium-precision fiber optic gyro bandwidth is above 200 Hz, Extended, the late time is on the order of microseconds, so it can be based on performance in practical applications. Requires simplification of the transfer function, generally taken GFOG (s)≈ KD.

For Wc (s) form and parameter selection, can use classic single-axis screw stable platform design [2]: Because the fiber optic gyro sensitivity is the angular rate, in order to complete the design of the platform with no static difference, the correction network needs to be introduced. Into the two-stage pure integral link, two zero points need to be introduced to compensate the phase.

According to the actual application environment and technical requirements of the platform stabilization system, get the basic technical indicators of the loop. For the gyro stabilized in this article set the platform, the required overshoot is less than 30%, and the loop adjustment time is less than 200 ms, can roughly estimate the bandwidth of the stable loop to be about 15 Hz; The total moment of inertia of the body is about 14 kg·m2; the total disturbance torque is ±2.5 N·m. Combined with given data, frequency domain control via Matlab Correction link calculation and simulation analysis of the system, including low pass. The correction link of the filter is

It can be seen from Fig. 3 that under the action of 1 N·m step disturbance torque, the angle deviation of the table is 1.64×10 -5 rad, about 3.5′′; at the maximum disturbance, the deviation under the action of ± 2.5 N·m is not more than 17.5′′, the dynamic stiffness is good, and the gyro noise does not affect the dynamic characteristics of the stable circuit. Can meet the stability requirements of the design.

2.1. Analysis of the influence of random walk coefficient of fiber optic gyroscope on the system

For a platform-based stabilization system, the scale factor stability is basically not will affect the platform angle deviation; due to the gyro bias stability and non-repetition error, after the integration link will produce an angle proportional to time. Degree deviation will affect the long-term performance of the stable system. This error can be use external information or rotary modulation to compensate; but in a short time in the meantime, the horizontal fluctuation of the platform will mainly depend on the stable loop noise.

The noise of the gyroscope is the main component, which can be used in the 4 s time after Figure 3. The effect of this noise on the stability of the platform angle is clearly seen. According to the physical characteristics of the fiber optic gyroscope, the gyro noise can be approximated as the synthesis of angular velocity white noise and a slowly varying function. White noise at angular velocity driven by the sound, the platform angle deviation will have the characteristics of random swimming. Randomly around the true value of the angle, this angle error is defined as light fiber gyro angle random walk (ARW). ARW main source gyro Yiguang Road [3], the mechanism is complex, this section focuses on this error characteristic. The effect on the angular deviation of the platform stability system.

The initial angle of the platform can be set without considering other errors. Deviation β(0)=0 , then:

Describe the size of the random walk of the fiber optic gyroscope N (national military standard is expressed in RWC), the unit is

. The calculation method of N is based on the average of the gyro output signal 1 s upper, power spectral density of angular velocity white noise Pu .The conversion relationship between P and the random walk system is

Figure 4 1 Within the platform angle deviation

From the above difference calculation and simulation analysis, it can be seen that for a stable system with fiber optic gyroscope as a sensitive device, the ARW error will cause a large platform angular deviation in a short time, which is the main factor of the platform angle error, and cannot pass the error parameter. The calibration is corrected.

According to the different uses of the stable platform system, other navigation errors, such as alignment errors, navigation position errors, etc., can be calculated from ARW errors. Therefore, a rate-type inertial angle sensor similar to fiber optic gyro is used to form a stable platform system. Random walk is an error term that cannot be ignored. Fiber optic gyroscopes with appropriate accuracy must be selected according to technical requirements.

In order to meet the requirements of long-term operation of a stable platform system, it must pass other means to suppress the gyro drift and the angle caused by random walk. The angle error of the table is generally performed by using an angle sensor to form a position loop. Control means to achieve. This article is placed orthogonally by using two levels accelerometer-sensitive platform deviates from the gravitational acceleration caused by the horizontal plane. The component forms a feedback control that suppresses the divergence of the angular deviation. Controller design the meter can basically be carried out in a similar way to the stable loop, no longer separate discussion; the filter in the feedback loop should be in the form of environmental disturbances and gyro drift. The level of integration is considered and the design is relatively more important.

Due to the movement of the carrier and the presence of various external disturbances, the periodic horizontal sway of the carrier; and for the position feedback loop itself. Gain acceleration component and load due to platform angle error .The horizontal acceleration generated by body sway is indistinguishable, if not added, it cannot be applied to correct the platform angle error considering the general low speed.

The average value of the horizontal sway acceleration of the carrier will be statistically long-term gradually converge to zero, so low-pass filtering can be used to eliminate periodicity. The effect of horizontal acceleration, the greater the loop time constant, the more the filtering effect it is good. However, the excessive time constant makes the feedback loop unable to suppress the stability back in time. The angular deviation of the road also causes the feedback loop to converge for too long. It is difficult to meet the requirements of leveling convergence time in practical applications. Therefore, feedback back the low-pass filter in the middle of the road must combine the above two aspects of compromise. For some typical low frequency disturbances, it can be roughly a series of less than 25 s. The amplitude of the random sine wave is superimposed to simulate, in the design to counter. The sinusoidal fluctuation of the 0.3 s period with a maximum influence of the feed loop is 0.3 g. Enter the interference simulation. In this paper, the amplitude-frequency response is selected as the “most flat”. Butterworth filter to balance filter and frequency adaptability :

Where C is the undetermined constant; n is the filter order to be determined, generally use the commonly used second or third order.

, figure 5 is simulated in the sea. The platform angle response under the action of wave shaking and gyro drift. Simulation results it shows that the platform can reach within 5 minutes after adopting the second-order low-pass filter. To a stable working state, the turbulence of the waves creates a disturbance to the stability loop 6×10 -5 rad, which effectively reduces the impact of horizontal sloshing on the system; Comparing Figure 4, it can be seen that the feedback loop effectively suppresses the gyro drift. Platform angle error.

Large impact, for occasions with high stability and precision, particular concern, instruments with appropriate accuracy must be selected to meet design specifications.