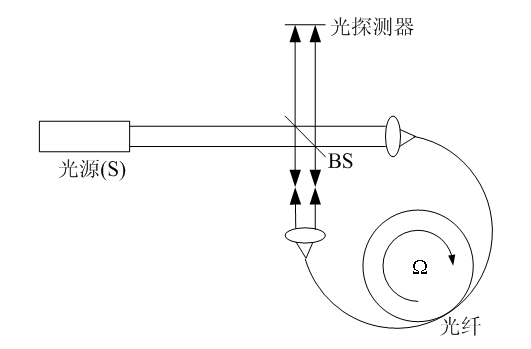 The fiber optic gyroscope is a fiber optic interferometer based on the Sagnac effect, that is, two beams of light that are transmitted in opposite directionsin the same fiber sensing ring to form a fiber Sagnac interferometer, as shown in FIG. 2 . 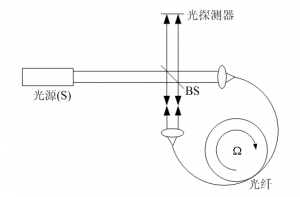 The light beam from the light source is split into two beams by the splitter/combiner, which are respectively coupled into the fiber sensitive coil from both ends of the fiber loop, and propagate in the forward and counterclockwise directions. The two beams coming out from the two ends of the fiber ring are superimposed by the splitter/combiner to generate interference, and the phase difference generated is proportional to the angular velocity of the ring:

The average diameter of the D fiber optic ring;

The wavelength of light in a vacuum;

The speed of light in a vacuum.

The information of the angular rate can be obtained by detecting the phase difference  (i.e., the intensity of the interference light), where the term is the scale factor of the gyro. 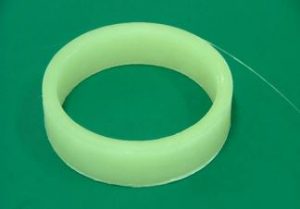 Fiber optic gyroscopes are photoelectric sensors that differ from conventional electromechanical gyroscopes. It has the advantages of no moving parts, wide dynamic range, direct digital output and networking with computer interface, and is ideal for mobile carriers and military applications. The feature is that the fiber optic gyroscope is directly connected to the carrier and can directly bear the various working environments of the carrier.

2. Then there is the fiber optic gyroscope as a rate gyro, whose output information can be directly used as the attitude control signal of the artillery or tank; at the same time, as an important part of the carrier attitude control, it passes the sensitive angular velocity signal to the carrier attitude stabilization system. Advance control provides conditions. It mainly plays the following roles:

2) The system has a certain bandwidth bandwidth requirement, which is mainly determined by the operating conditions of the system.

6) The fiber optic gyroscope is used as a rate gyro to the angular velocity command system. The attitude control loop system gain provides a unity acceleration transmission gain. Normally, the loop gain is less than 1, the system is particularly sensitive to speed changes. In addition, any noise of the system command is amplified by high gain, and, in order to avoid noise saturation, actuator electronics have a large dynamic range.

ER-FOG25 fiber optic gyroscope contains five optical devices, a set of structures, a signal detection front plate, and a light source control circuit board. The structure is integrated with optical system and circuit system. It is simple to install, easy to use, stable and reliable. Users only need to use a plug to provide power supply, external motherboard, and receive gyro output data.The product can be used for attitude measurement, navigation, guidance and other fields.

A)  Measuring range: not less than 500 ° / s, can be adjusted according to user requirements; 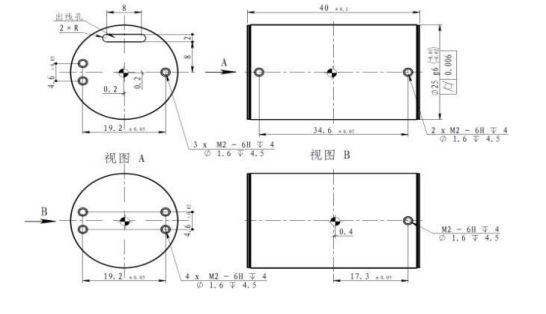